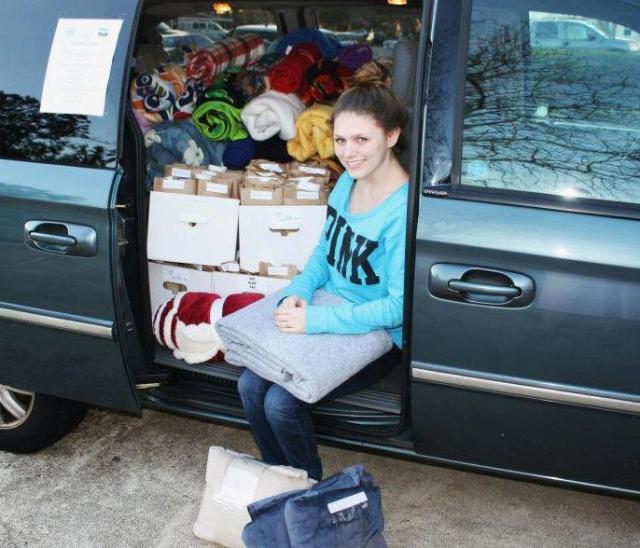 Mariah herself was dependent on the kindness of strangers as a child: abandoned as a newborn on Christmas Eve, she spent the first two years of her life in foster care before being adopted. When she gave away her first blanket in 2011, she realized how much difference such a small gesture could make to a person in need. “The look in his eye when I wrapped that blanket around him haunts me to this day,” she told NBC News. “It was a look of desperation and appreciation all at once.”

Her mother, Moira, helped her launch her non-profit, which is dedicated to providing blankets, food, and other necessities to homeless people in the community. Word quickly spread among the homeless community, who nicknamed her Blanket Girl. It also spread among local churches, businesses, and schools, who started contributing to her work. “We couldn’t do all that we do without the support of the community,” she says.

Now a psychology major in college, Mariah spends hours every day gathering and distributing food and blankets. She also speaks at elementary schools, universities, and Girl Scout troops to raise awareness about homelessness, letting others know how they can make a difference: “Once you help someone who’s homeless it changes your life forever,” she says. “You think about them when it rains; you think about them when it’s way too hot outside, when you can’t stand to be out there.” This Christmas season, with the help of local donors, she assembled over 850 stockings to hand out, full of supplies like toothbrushes, hats and gloves, as well as treats like cookies and personal messages of support.

In the long-term, Mariah would like to encourage others across the country to join her cause by keeping a box in their cars full of blankets, cold-weather gear, and non-perishable foods that they can give out immediately when they see someone in need. “I just want everyone to start to think about the homeless more and maybe themselves a little bit less especially in this time of year. I hope people will start opening their minds more and think about the reality that people are really going through.”